Our New York whistleblower attorneys provide first-tier representation in Dodd-Frank whistleblower claims. With in-depth knowledge of the securities industry, from the inside out. We will get your matter noticed.

From Jenice's interview for the Masters of the Courtroom series on ReelLawyers.com.
View Transcript 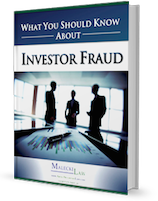 Malecki Law’s New York Whistleblower lawyers know that it often takes the courage of whistleblowers to call out covertly illegal business practices. In July 2010, the United States government passed the Dodd-Frank Wall Street Reform and Consumer Protection Act. This reform aims for increased public watch and censure of misconduct in state and national economic affairs. Dodd-Frank takes precise strides to protect the whistleblowers within the finance industry, as well as compensate anyone who believes that they know of wrongdoing, regardless of whether they worked for or with the company or not. Our whistleblower attorneys in New York can guide you in filing a tip. Even rumors, if they can be substantiated, could generate a whistleblowing award, up to 30% of a total recovery greater than $1,000,000.

Dodd-Frank further punishes employers who mistreat, threaten, or otherwise persecute whistleblowers offering information to towards any regulatory action. Whistleblowers can remain anonymous and if they are retaliated against, our whistleblower law firm in New York routinely files a separate tip or action, even in the same matter, if retaliation occurs.

Malecki Law’s whistleblower attorneys in New York are ready for completely confidential in-person or virtual consultations. The SEC has awarded over $1 billion in whistleblower awards since the time it started issuing whistleblower awards back in 2012. As the public awareness of whistleblower rewards and awards spread more substantial tips and claims have been reported. The Office of the Whistleblower (OWB) has also continued its efforts to make whistleblowers feel safe and the anti-retaliatory protection encourages individuals to come forward.

Malecki Law helps prepare statements and ensure that whistleblowers are ably represented when addressing the regulators at hand. One of the most important features of Dodd-Frank is the award system for whistleblowers who provide original information and the anti-retaliatory provision. They need skilled representation otherwise they might risk waiving away their rights to claim the award.

Our whistleblower law firm in New York have a substantial background advocating for clients in whistleblower filings and litigation, including retaliation claims. We represent people throught the country and the world in these claims. Before the collapse of the housing market, in the wake of the Sarbanes-Oxley Act, and prior to and after the Dodd-Frank Act, Ms. Malecki, our lead whistleblower lawyer in New York, represented multiple whistleblowers, including some of the first, Arturo Cifuentes and Eric Kolchinsky amongst others. At that time, whistleblowers had less anonymity. Today, our clients enjoy the anonymity of the Dodd Frank Act.

Attorney Advertisement. Prior results do not guarantee a similar outcome.

Contact Us
Practice Areas
See Our Results
New York Securities Fraud Lawyers Blog - Whistleblower Issues
Testimonials From Former Clients
★★★★★
I highly recommend Jenice and her team at Malecki Law. I had a challenging, and lengthly case. Jenice was professional, very knowledgeable, and a pleasure to work with. She managed to make the process far less stressful during a very difficult time. They care about their clients, and it definitely shows. Mario
★★★★★
Jenice is truly a miracle worker and one of the top securities lawyers. She handled a very difficult case for us, displaying her legal knowledge, intelligence, and savviness throughout the process. I cannot recommend her enough. The quality of work from her team rivals that of corporate law firms. She was always available, extremely professional, and made sure to know all the details of the case. We were very fortunate to have been referred to Jenice and highly recommend her for any securities related legal issues. Nathan A.
★★★★★
An excellent professional who represented us in trial regarding a bank fraud, an unexpected and difficult time. A professional that worked hard, persevering and who stood toe to toe against firms that had a team of excellent lawyers backing them up. Her unflinching determination really stands out, it makes you feel you have someone who really cares about trying to recover what you lost from the people that wronged you. Salomon Levi
★★★★★
It is difficult to thank you in words when gratitude comes from the heart, so I will try to link feelings with writing. It is essential for us to mention your excellence as a professional, your aptitude on legal fields, and your unavoidable persistence. All of these virtues that elevate the profession you exercise in such an admirable way, go hand in hand with your sense of ethics, your human warmth and the transparency in your actions. To sum up, thank you for being a listening ear and for having the right word while transmitting information about the legal process. Having you as our representative during such an adverse situation was a privilege and enough reason for our eternal gratitude. Angeles Aparain
★★★★★
To say that my securities litigation was complex would be a severe understatement. With multiple parties involved and spanning many years, trying to understand the issues was daunting to say the least. Jenice and her team broke down the transactions by segment and by party uncovering every hidden expense. In the end, I was more than happy and could not thank Jenice and her team enough. I would not hesitate to recommend Jenice to anyone. She is highly professional, incredibly knowledgeable, well connected to industry experts, has a tireless work ethic and is so pleasant and easy to communicate with. Five stars for sure! Andrew Loughrane
View More
Submit a Law Firm Client Review